Being scammed out of money or being a victim of any sort of fraud can be frustrating, to say the least. But it happens more often than you think—and more and more crooks are making their way onto the internet to find their victims. According to the Federal Trade Commission (FTC), American consumers reported losing north of $5.8 billion in 2021 to fraudsters, which is a whopping 70 percent increase from the year before. And that is just the fraud that is reported; many victims never come forward because they are embarrassed or ashamed that they fell for various types of scams.

According to the FTC, scams involving imposters were the most common in 2021, but not the costliest. Investment scams cost more overall, just from a dollars-and-cents perspective. Nearly 2.8 million consumers filed fraud reports with the FTC in 2021, with the typical loss reported of $500. (Notably, this did NOT include reports of identity theft and “other” types of fraud, which accounted for 1.4 million and 1.5 million additional reports, respectively). Around 1 in 4 people who reported scams to the organization reported losing money to the scammer.

So, what can you do if you have fallen victim to a scammer?

While it is true that scam and fraud victims generally find themselves unable to recoup their losses, by reporting the scammer or fraudster to as many authorities as possible, you can help put them out of business. 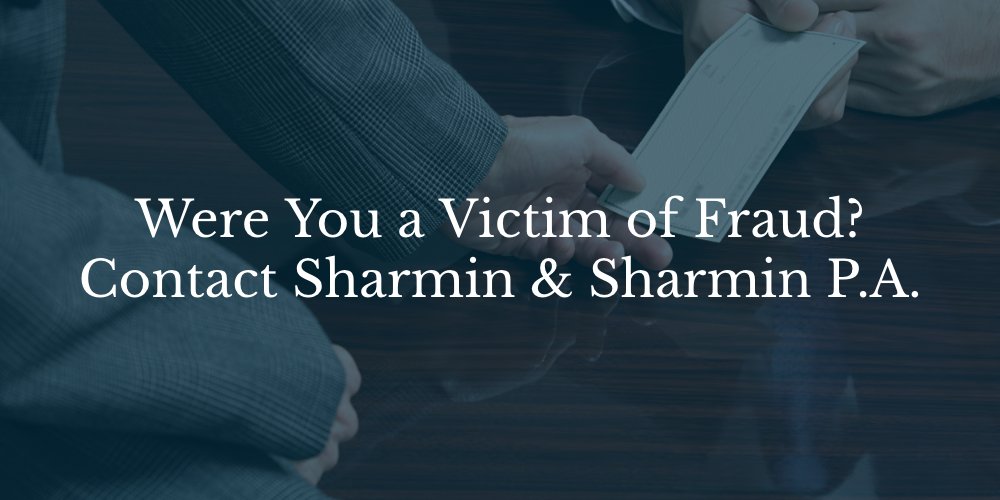 The odds of legal redress are in your favor if you work with an attorney who deals with fraud on a regular basis and who can help you hold the at-fault party in your case responsible for their actions. Whether you are the victim of identity theft, check fraud, tax return fraud, credit card fraud, investment scam, or other fraudulent action, it is important to not only report the incident but also reach out to Sharmin & Sharmin P.A. to decide on the best course of action moving forward. Schedule a consultation with us by filling out our online form or calling 561-655-3925.

Do you have a case?